agni Agni literally means clan mother. This is a title given to the leader of a clan. Clans are structures with the size and population of a small to medium country.
am- Am- is a prefix added to the first syllable of a name to turn it into a diminutive (ex. Ragu --> Amra). Or two syllables if the name is long (ex. Ulmarei --> Amulma).
fringe Fringes are people who are not considered adults but also have slightly different rights then small children. More on fringes can be found in the 'Cultural guide' section.
Gdezsu Gdezsu is one of the clans. Ragu and Zenwu come from there. The list of everyone from Gdezsu can be found in the 'Characters' section.
Haibne Haibne is one of the clans. Uene and Fuzs come from there. The list of everyone from Haibne can be found in the 'Characters' section.
hed Hed is the official title of the oldest son of an agni.
hym Hym is the official title of the oldest daughter of an agni. The hym is the heiress of the clan.
ignaf Ignaf is the official title of the top strategist in a clan. In terms of power the ignaf is usually the second or third person in the clan.
locyin Locyin is a vocational organisation that groups and trains professionals, often without a locyin membership people can't legally do certain jobs.
Mbozs Mbozs is one of the clans. Tamna, Fuzs and Uene's ninak is from there.
ninak Ninak literally means the mother's brother. An in most cases it refers to the brother(s) who live(s) with the mother of the household and help(s) her bring up her children. In the ruling families it may also refer to a bonded mate of the clan ruler, with whom she has her legally recognised children. In a sense an equivalent of a father because it means the person who takes care of the children together with the mother.
ses u Ses u means a trainee of. This is the first step in most careers in Huzsa.
the Tent The Tent is the official term for the upper echelones of the military of a Huzsan clan, you can find more information on the tent in the "military" section of the cultural guide.
zsy Zsy means honourable. It is put in front of a name of title to show respect.
zsyni Zsyni means honourable mother. It's a very formal and respectful way to address one's mother. Most people use diminutives nini or amni.
Share this comic

Characters on this page: Fuzs, Showoff.


If you can, please support OCaC on Ko-fi. 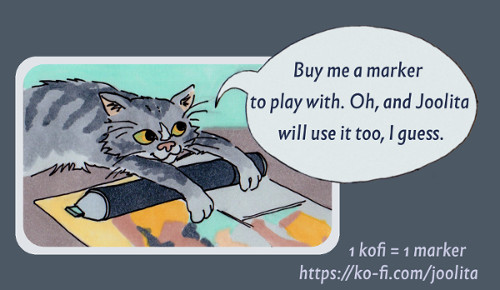